What our clients say

I cannot recommend Rushlight Music highly enough. They are worth every penny-- they will make your event truly special!

Our musicians are incredible, seasoned performers that have played music all over the world. From Europe to South America, from Mainland China to Thailand, they have performed for audiences large and small, rich and poor. They are experienced in a number of genres, including classical, bluegrass, tango, folk, rock, jazz, and pop. All of our employees live locally in the San Francisco Bay Area, and work as full-time musicians.

Many of our musicians have performed with the San Francisco Symphony, Oakland Easy Bay Symphony, San Francisco Chamber Orchestra, New Century Chamber Orchestra, and have performed at the Tanglewood and Aspen Music Festivals, Hardly Strictly Bluegrass, South by Southwest, and countless other events. They have played with musicians such as Barry Manilow, Death Cab for Cutie, Carlos Santana, and many, many more!

People we have played with:

Interested in what we are up to OTHER than Rushlight? Visit our musicians’ sites! 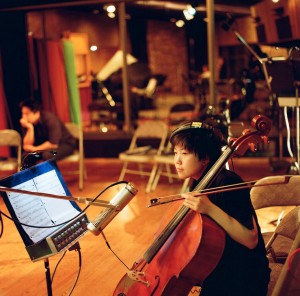 Bay Area native Michelle Kwon holds B.A. and M.M. degrees in Violoncello Performance from Stanford University and the San Francisco Conservatory of Music. Although trained as a classical musician, she is enthusiastic and pursues many different styles of music in hopes of blurring the defined lines of genre.

A passionate chamber musician, she has collaborated with artists such as Itzhak Perlman, Menahem Pressler, and Edgar Meyer, and has worked with Joel Krosnick, Robert Mann, Russell Sherman, and the St. Lawrence, Alexander, and Julliard String Quartets. Her other chamber music endeavors have included collaborations with folk and jazz artists such as Carlos Santana, Kenny Endo and the Kenny Endo Taiko Ensemble, Tin Hat, and Quartet San Francisco. She has also performed as a Fellow at both the Tanglewood Music Festival and the Banff Centre for the Arts.

An equally enthusiastic orchestral player, she performed with the inaugural YouTube Symphony Orchestra at Carnegie Hall, and holds positions with the Oakland East Bay Symphony, Monterey Symphony, Fresno Philharmonic, and the San Jose Chamber Orchestra. She has worked with conductors such as Sir Simon Rattle, James Levine, Kurt Masur, Herbert Blomstedt, and Michael Tilson Thomas, and recently recorded the Kreutzer Concerti with violinist Axel Strauss under the Naxos label.

She is also a member of the Magik*Magik Orchestra of San Francisco, and has collaborated with rock and pop artists such as Death Cab for Cutie, Charlie Wilson, Third Eye Blind, and John Vanderslice. Through the orchestra, she has recorded for two Grammy-nominated albums.

JOIN US ON SOCIAL MEDIA

Click here to make a payment to Rushlight Music.